With the premiere of the upcoming six-part A&E docuseries, Who Killed Tupac, just a few weeks away – it begins Tuesday, November 21st – you’ll soon start to see promos for the show, and, with greater frequency, you’ll see me out and about talking about it as well.

In addition to being a producer on the series, I’m featured in it as one of the three investigators working with leading civil rights attorney Benjamin L. Crump…

…the attorney for Trayvon Martin‘s family, Michael Brown, Tamir Rice, and many others throughout the country involving the senseless murders of unarmed African-Americans and people of color. The four of us put our best efforts forward in the docuseries, determined to seek justice for this long-unsolved case.

Last week I was featured on the podcast Truth Be Told TV, hosted by the affable and gracious Tony Sweet and his guest co-host, the very charming Tricia Carr. They were a blast. Check out the interview here:

This week I was interviewed on by the very engaging T.K. Trinidad on the show Black Hollywood Live Conversations. We had a lively discussion that covered my most recent book Once Upon A Time In Compton… 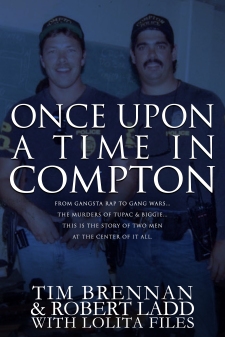 …written with former Compton gang unit detectives Tim Brennan and Robert Ladd about their nearly twenty years working the streets of Compton and their first-hand involvement in investigating the Tupac murder case. We also talked about how my career path led me to doing the book with them, my regard for Tupac, and what to expect in the upcoming A&E docuseries. T.K. was so much fun. She kept trying to crack me to give up answers, but (as you’ll see in the interview), I’m pretty good at bobbing and weaving, lol.

Be on the lookout for more to come as the premiere date for the docuseries gets closer.