I wrote some books. Some folks really like them. Maybe you will, too!

Once Upon A Time In Compton

Description: Description: For twenty years, gang unit detectives Tim Brennan and Robert Ladd patrolled the streets of Compton. They witnessed the birth and rise of gangsta rap with acts they knew personally, such as N.W.A and D.J. Quik; dealt firsthand with the chaos of the L.A. riots, its aftermath, and the gang truce that followed; were involved in the investigations of the murders of hip-hop stars Tupac Shakur and The Notorious B.I.G., and were major players in an all-out tug-of-war with City Hall that ultimately resulted in the permanent shut-down of the Compton Police Department.

Through it all, they developed an intricate knowledge of gangs and the streets and a methodology that has been implemented by local law enforcement agencies across the country. Their compassionate and fair approach to community policing earned them the respect of citizens and gangbangers alike.

This story – told with bestselling author Lolita Files, whose research with Brennan and Ladd has spanned over four years – is a firsthand glimpse into a world during an era many have heard about in song and legend, but have rarely had the opportunity to witness at ground level, from the inside out, through the eyes of two men who witnessed and experienced it all.

Description: Everybody knows everybody else’s business in Downtown, Tennessee. Neighbors while away afternoons at the local bar, swapping rumors about voodoo, incest, and illegitimate children. Usually they’re gossiping about the Botens.

In this epic saga, Lolita Files unveils the hidden lives of three generations of the Boten clan, a family as cursed by fate as they are blessed with hope. There’s Grandma Amalie, who’s willing to sacrifice everything for her son; there’s Grace, who manages to conceal the identity of her child’s father for more than twenty years; there’s Aunt Sukie, whose strange power over her husband, Walter, is matched only by the strength of her dark magic; and, finally, there’s Lay, whose secret betrayals will set the Boten clan in motion, sending its members on a quest for self-discovery that will lead them from one end of the world to the other.

This book was optioned for film by Entertainment Studios. I adapted the script. It’s set to go into production in 2016.

Description: Gifted with rock star looks and a genius IQ, Penn Hamilton has been inspiring awe since he was a baby. Now he’s ready to take on the world and claim his rightful place in the midst of celebrity. As a Writer. Rapper. Model. God. Unfortunately, the world’s not quite ready for him.

But when Penn meets Beryl Unger, high-powered editrix to literati and glitterati alike, sparks fly. Sparks fly even higher when he meets one of Beryl’s authors, superstar romance author Sharlyn Tate. Two women, one man. A man with no boundaries, who will stop short of nothing—even brutal, vicious murder—to have the success and adulation he so desperately desires.

Scenes From A Sistah 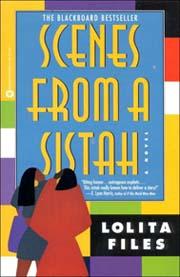 Description: Misty Fine and Reesy Snowden, friends since second grade, share at least two common goals: having fun and finding Mr. Right. But as their careers rise and fall, and men come and go, they embark on a series of misadventures that take them from Fort Lauderdale to Atlanta to New York-from male troubles and exotic dancing to office conspiracies and, ultimately, the promise of real love.

Getting To The Good Part 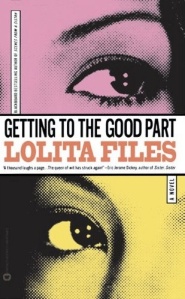 Description: Reesy and Misty are back! Mistys career is thriving and wedding bells are ringing. Reesy is trying to be happy for her friend, but is troubled by this intrusion upon their friendship. Reesy herself has won a role in an Off-Broadway show and is seeing a man who might be a keeper. Unfortunately, her self-destructive tendencies threaten to destroy her until true loveand true friendship save the day. 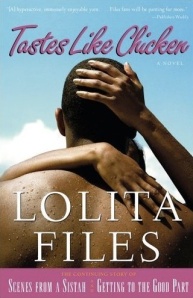 Description: They’re back by popular demand! In Tastes Like Chicken, Lolita Files continues the story of Misty Fine and Reesy Snowden, the dynamic heroines of her bestselling novels Scenes from a Sistah and Getting to the Good Part.

What’s a girl to do when she finds out her man’s been feeding her lies? When readers last saw the girlfriends, Misty had just married her dream man, Rick Hodges, and was off on a fabulous honeymoon. A pregnant and newly engaged Reesy was riding off into the sunset with her fiancé — reformed ladies’ man Dandre Hilliard. But it isn’t long before everyone starts misbehaving, and in Tastes Like Chicken, they get what’s coming to them.

With steamy thrills and disastrous infidelities, Tastes Like Chicken is a tale of two women who find themselves poised at life’s crossroads with everything to lose but their friendship. Filled with the humor and personal drama that made her first books national bestsellers, Lolita Files’s latest takes the sistahs — and readers — on their wildest ride yet. 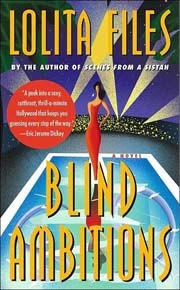 Description: Hollywood. The place people go to fulfill their dreams. But its reality is a cruel one: Opportunities are few and the competition ruthless. Innocent hearts can suddenly turn dark, and the most loyal of friends can become bitter enemies. Desi, Sharon, and Bettina are three black women struggling to make names for themselves amid the glitz, glamour, and deception. Before each woman can be swept away by the intrigue and intensity of the entertainment industry, they must answer to the desperate calls from the ghosts of their pasts. But if they do, will the shadows of infidelity, abandonment, and murder destroy everything they’ve worked for?

You Only Get Better

Three fascinating women discover that life, love and everything else gets better with age!

Maxine Davis’s life is careening out of control—her marriage is dull, her teenage daughters are driving her insane and she is days away from a big birthday. New York Times bestselling author Connie Briscoe spins a compelling story of betrayal, forgiveness and redemption in The Perfect Life.

A nasty divorce and the tragic events of 9/11 help an empty nester see beyond the narrow confines of her material world.

In Three for the Road, Essence and Blackboard bestselling author Lolita Files takes readers on a breathtaking road trip to self-discovery with Lillibelle Goldman, as she meets an unlikely kindred spirit…

In This Time Around, by bestselling author Anita Bunkley, a successful career woman proves that life doesn’t end at forty. At forty-nine, Anika Redmond has just received an extreme makeover. But even with her new, hot body and a power job, Anita is still searching for the one thing in life that eludes her—a happy ending….